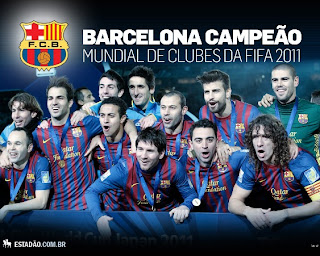 BARCELONA were crowned FIFA Club World Cup champions in Japan yesterday after hammering Santos 4-0 in the final.
And Barca coach Pep Guardiola dedicated the win to injured striker David Villa, who broke his left leg in the semi-final on Thursday.

Guardiola said: "I want to dedicate this victory to Villa.

"His injury was the most unfortunate thing of this tournament, but I am sure that he will return to the team soon.

"My players were like artists. Whatever they envisaged in their minds they were able to do on the pitch.

"It was an incredible performance."